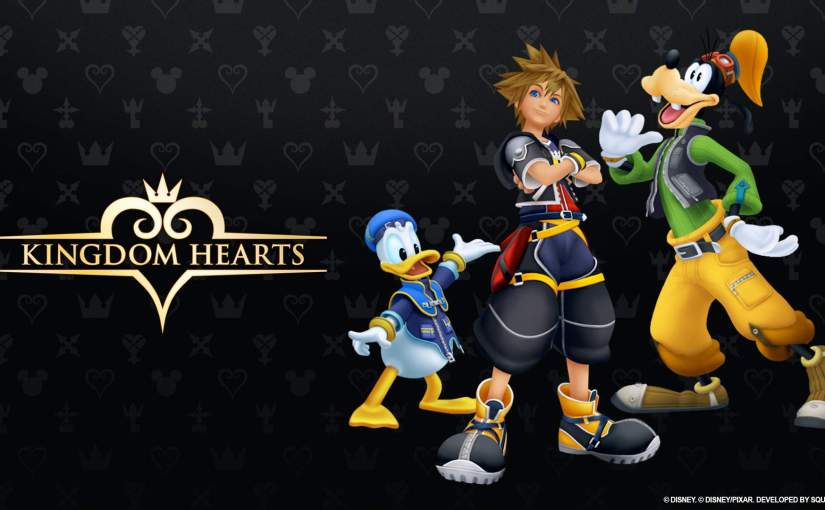 This year marks the 20th anniversary of the game series that’s intertwined spiky-haired anime characters with beloved characters from one of the world’s biggest conglomerates.

Kingdom Hearts is a roller coaster ride of twists and turns that I’ve been able to experience from the time I was going to middle school dances to the time I bought my first house.

Here are the top 13 moments from the series.

We’ve all been there where we haven’t seen friends in a long time and when we do, it’s like things never changed. We get that here where Sora hasn’t seen Kairi or Riku since before puberty and when he does, he understandably gets emotional. It’s easy to forget that Kingdom Hearts II starts and your only known objective is to find Riku. Then it evolves into what it becomes.

Sora is ready to forgive who he thinks is Ansem for what he’s done because he saved Kairi. I don’t know if that’s incredibly naive or kind. When he realizes it’s Riku, he gets down on his knees and we all start crying.

This is one of the more bittersweet moments from the series. It’s the end of one book and the start of another. The existential crisis that Roxas has leading up to this moment is absolutely heartbreaking. He comes to the realization that his summer is over and he’s going to seemingly be forgotten.

All hope seems to be lost as Master Xehanort is revealing his big bad plan to Riku and Mickey. They’re outnumbered and Sora is out of commission. At the moment Xehanort is about to ‘Nort’ Sora, Axel saves the day with a well-timed fire ball. It’s a hype moment because Axel comes in the clutch, but it’s also the moment he tells the world he wants to be called “Lea.” It’s a powerful moment.

We love a long and dramatic character death. After unleashing a powerful attack to help out Sora and friends, junior hero Axel begins to fade away. As he’s lying on the floor of a strange void world, he begins to tell Sora that Roxas is the only person who made him feel like he had a heart. That’s exactly why he sacrificed himself to make sure Sora could continue his journey. He did it for Roxas.

The opening movie of Dream Drop Distance is the best in the series. It’s a gut punch to that nostalgia organ that’s unmatched in the rest of the series. We get to see the big story beats of the series beautifully rendered with that beautiful Square Enix look all with the backing of the masterful orchestral version of Simple and Clean . Pair that with playing it on the 3DS where Mickey’s silhouette is flying across both screens, it’s an experience.

This was such a bizarre moment for 12-year-old me playing this for the first time. I had never seen the main character of any media I had consumed sacrifice themselves in this way. I really thought Sora was gone. We would do anything for the ones we love. That’s what Sora did. The thing that pulls this scene together is what can pull any scene from Kingdom Hearts together: a variation of the game’s theme song.

Most of the moments in this list are from cutscenes and this is the first that’s from gameplay. This may be my favorite boss fight in the entire series. If you would have told me 10 years ago that I would get to play as a keyblade wielder who wasn’t Sora and battle a storm of Heartless with Mickey Mouse backed by an epic score, I wouldn’t have believed you. I am so glad I was proven wrong.

Even if we ignore the ridiculousness of the scenario, this moment holds its own with gameplay alone. At this point in the game, the player is pretty upgraded and able to use a lot of tools in their arsenal to beat this swirling storm of Heartless. 0.2 introduced the combat system we saw again Kingdom Hearts III, a combat system that had 15 years to become squeaky clean polished since the original game.

6. Aqua Sacrifices Herself for Terra (Kingdom Hearts: Birth By Sleep)

I am an unapologetic Aqua fan. She’s my favorite character in the series and it’s because of moments like this. She would do anything for her friends and that includes giving her life. Aqua is holding the unconscious body of her best friend Terra, who has been possessed by a madman. They’re sinking to the depths of the Realm of Darkness and she realizes they won’t make it out together. In a truly selfless act, she instructs her armor to bring Terra to the surface world. The entire trajectory of Kingdom Hearts’ story could have been altered had Terra not been returned to the world by Aqua.

This is the one moment on this list that I still watch every now and then. It was such an epic and grandiose showcase of what a future installment of the game was going to be. It felt dark and gritty. It’s incredible the story it tells in less than 4 minutes with no dialogue.

I wasn’t on the internet when Kingdom Hearts II was released, but I’m sure the fanbase was losing their minds over this at the time. Who are these masked characters? Who’s that bald guy? Is that Roxas?

Kingdom Hearts is home to a lot of cheesy moments like this one. There’s a few instances in the series where the protagonist tells a bad guy that their friends are their power. This one hit different for me. Sora had just been monologued to about how the heart is a machine that can be controlled and he comes back with a heartfelt speech about the heart and how its connections to people are what make it strong. The cheese is strong with this one, but I love it.

In the final showdown with Xemnas, Sora is aided by his best friend Riku to finally banish this him for good. Kingdom Hearts loves to turn the anime up to 100 in the climax of its games and we get that here. Spiky-haired boys are flying around attacking this man in a dope trench coat who can unveil light sabers from his palms. Did I mention he can shoot lasers out of those same palms?

The laser stage of the boss fight frustrated me as a kid because I could rarely press triangle enough to reflect the lasers. I’ve come to appreciate how epic and powerful the moment is as I’ve grown older. It’s these two longtime best friends protecting each other and in the end, they work together to save each other.

I’ve seen the death screen many times while playing these games, which features a lifeless Sora floating in the darkness before the game asks me if I want to continue or load a save file. This moment capitalized on that by making you think you were at just another death screen before you realize it was all scripted. As Sora floats in the darkness, you hear your feathered and goofy friends start to shout Sora’s name. In the moments after that, Sora is brought back to life by their words and they defeat the big bad once and for all together.

I teared up when I first played part this because it made me realize that Kingdom Heart isn’t just Sora’s story: it’s Donald and Goofy’s too. They weren’t just your support NPCs. They were your friends too. Being the third main installment of the game and not knowing the future of the series, I had assumed this would be the definitive last fight of the series and that added to the impact of this moment.

Similar to #8 on this list, this moment was so jarring for me as a young adult. I remember feeling like Sora and saying “This isn’t happening,” but it was more from confusion and shock than anything. What makes this moment great is what happens shortly after our dear friend Goofy is conked on the head. We get strangely genuine performances from the voice actors for Sora, Donald and Mickey. You feel the emotional weight that they do. Then Mickey throws off his black robe and seemingly goes on a Heartless and Nobody killing spree to avenge his fallen friend.

Up until this point in the series, I didn’t think of Goofy as an integral part to Kingdom Hearts. This moment solidified that. As soon as I thought about what the possibility of this video game world without Goofy would be like, it hit me hard. We hyuck you, Goofy.